Home / About us / History

The History of Jews in Subotica 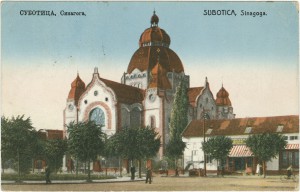 The first Jew, who was permitted to settle in Subotica, was Jakab Herschel, a tradesman.

The City Magistrate concluded a contract with him and another three Jews from Baja, named Löbl, who might have been siblings, on August 7th 1775.

The names of these Jews had already been entered in the city’s registries since 1764. Herschel was permitted to settle in the city with his family” depicts Dušan Jelić in his work about the Jews in Subotica, published by the Jewish Historical Museum from Belgrade.

A couple of years on, when the number of Jews raised to 12, the Subotica Jewish Community was established.

Besides the name of Jakab Herschel, the founders’names known to us are: Salamon Hajduska, József Kuhn and Jakab Löbl.

Jews settled in Subotica were Ashkenazi and the language they used was Yiddish, a language in which outstanding works of literature were written. Yiddish is still spoken in North America, Romania, Israel and some other countries

After founding the Jewish Community in 1775, its development was largely hampered by the legislation against the Jews, who tried to find a way out from such situation in assimilation.

Jews had to fit in the city’s agricultural milieu. Owing to that, abuses, atrocities or pogroms against the Jews have never occurred in the city.

The material and intellectual culture of this ethnic branch comprises elements of German, Hungarian, Polish and Russian origin.

The events of the Hungarian Revolution of 1848-49, led by Lajos Kossuth, brought about a change in the attitude towards the Jews. Namely, the law on the liberation of Jews was adopted by acclamation in Szeged on July 28th 1849. 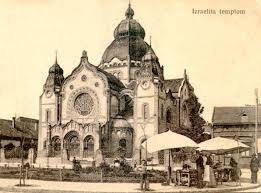 However, during the aftermath of the revolution, the institution of the Jewish Oath (more judaico) was renewed and Hebrew prayer-books and registry entries in Hebrew were prohibited in 1852.

It was only after the Austro-Hungarian Compromise in 1867, when the law on the emancipation of Jews was adopted. The wording of the law is simple and clear:

1.§ Israelite and Christian citizens of the country shall be equal in exercising both civil and political rights.

2.§ Any law, custom or decree contrary to that is hereby abolished

These favourable developments were followed by the rapid inclusion of Subotica Jews in the economic, cultural, political and sport life.

Lajos Pollák established a Jewish hospital in 1923, which was moved into the building of the Park Nursing Home in 1925.

In the same year, a Jew Zionist Youth Organisation was founded under the name of Achdut ha’olim. Szombat and Izrael, the Jewish papers, were published regularly. The National Zionist Federation held its assembly in Subotica. The Kutna Mór Talmud-Torah Club was active in fostering tradition-based Jewish education. The Reusz Jewish Youth Club was founded.

Radio Belgrade’s first concert coverage was from the Subotica Synagogue in 1932.

That year, nine young people immigrated to then-Palestine, and that was the first “Aliyah” in the city.

Hitler’s Germany attacked Yugoslavia on April 6th 1941. Bačka was occupied by Hungary after that and was considered the integral part of the country in all respects.

Of the 85 hostages taken in Subotica, 34 were Jews. These hostages guaranteed by their life that there would be peace and order in the city.

Jewish men were taken to forced labour camps for mine clearing on the Ukrainian frontline.

The decision about “cleansing the country of Jews” was adopted on April 19th 1944 and its implementation started on April 26th.

Although the list of local Jewish victims during the Fascist occupation from 1941-1945 comprises only 2006 names, the deportation and forced labour measures affected, in fact, 6105 Jews from Subotica.

This number includes Christianized Jews, who were taken as Jews according to the racial laws of the time or persons of Jewish origin.

Only 1065 returned from Auschwitz or other death camps or from the mine clearing on the Ukrainian frontline.

After the Aliyah an 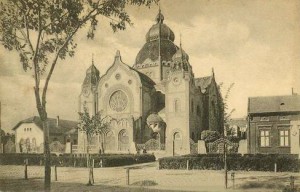 d internal migrations in the country during the aftermath of World War II, the number of Jews in Subotica started to drop slowly, but continuously.

The building of the first Synagogue was permitted by the city only in 1799, after repeated applications by the Jews. By that time, services were held in private houses.

The Chevra Kadisha was established at that time as well, which has been taking care of the Jewish cemetery and burials ever since…

The first Rabbi in Subotica was Léb Hirschmann. He died in 1860 after long and blessed duty.

The stately building of the Synagogue bearing the well-known elements of the art nouveau style of its architects, Komor and Jakab, was erected within a year. It was consecrated during the autumn holidays in 1903.

At that time, the Subotica Jewish Community was lead by the excellent writer, Izidor Milkó and the chief rabbi was Bernát Singer.

After the nationalization of the Jewish school, its role was taken over by the Talmud-Torah providing religious education two times a week. The Talmud-Torah was managed by József Gerson, chief Rabbi, and had 200 pupils.

Organisation of the Subotica Jewish Community was established in 1852.