AMIR WAS LOVED BY TWO MOTHERS

The Szagmeister and Engler families lived in the same house in Subotica in flats next door to each other. Laszlo Szagmeister and Janos Engler were both jurists employed in the Attorney offices of Sekely Zoltan. When in 1941 Yugoslavia capitulated, Subotica became part of Hungary upon the division of Yugoslav territories among the German allies. Jews were the first to feel the brunt of war. Persecuted and taken to work camps, they were assigned forced labour work and, very frequently, were never seen again. 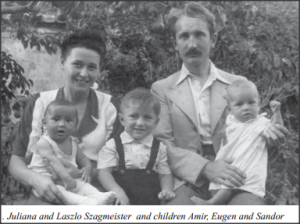 Janos could consider himself lucky since he would sometimes manage to return home from camp. Janos’s wife, Magda, gave birth to son Amir-Paul in February 1944. Ten days earlier, Laszlo’s wife, Juliana, had also borne a son, whom they christened Sandor. Juliana had given birth to her first son, Eugen, in 1941.
Nazi Germany was dissatisfied with the relatively lenient conduct of the Hungarians toward Jews. When the Germans realized that the war was coming to an end and that the “Jewish Question” in Europe had not yet been resolved, they occupied their former ally, Hungary. From then on the fiercest persecution of Jews, who hitherto had not felt the full horror of the anti-Jewish Fascist ideology, began in Hungary and territories under its control. In a very short time, hundreds of thousands of Jews were deported to death camps and only a handful of them managed to survive the immense atrocities in store for them.
In May 1944 the Jewish ghetto was instituted in Subotica. Janos was slave labouring when Magda and the baby were sent to the ghetto. By that time, Laszlo was already unemployed since the Attorney Offices in which he had worked had been closed for some time. Sekely had also been taken to forced labour. Never shy of any work, Laszlo now got down to helping Magda and the child live through the situation they had found themselves in. He had connections in the police force where he had, prior to the war, worked as a jurist. From the moment Magda and her baby Amir were driven into the ghetto, he made a point of visiting them every day. He travelled a distance of 20 kilometres on his bicycle in order to bring Amir the day to day supply of fresh milk. Finally, he suggested to Magda that he and his wife, Juliana, take Amir in with them. One day he and Juliana entered the ghetto with a baby-stroller. As agreed, they found the baby beside the wall of the building Magda and the child lived in. Magda dared not show herself for fear that the guards might see them together. The Szagmeisters took the child to their home. 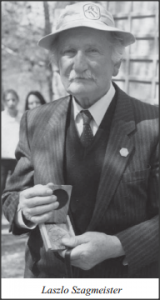 Round the middle of June the last transport of Jews for Bačalmaš and from there on to Auschwitz was in preparation. Magda found a man she could trust to ask Laszlo to come to the ghetto once more so that she could learn how Amir was doing. When Laszlo came home that evening he found Juliana in tears. The police had taken Amir. The “trustworthy” man had gone straight to the police to report that Magda’s son was not with her in the ghetto. Pressure was put on Magda to return the child back into the ghetto. There was no alternative since all lies to the effect that the child was not hers were futile. From that moment a ferocious race with time began. Laszlo and Juliana sold all the books and paintings they had. They obtained 800 pengos, by no means a measly sum at the time and enough for Laszlo to initiate further action. He obtained fake documents stating that he and Juliana had adopted Amir, whom they had named Palika. Armed with these papers, he strode into the ghetto in search of his adoptive son. When the introductory entreaties developed into harsh words and subsequently into a fight, it was finally money that once again won the battle. Laszlo managed to walk out of the ghetto with Amir a second time. Magda was taken to Auschwitz together with the other Jews.
Juliana would go for a walk twice each day; once to take out Sandor, and the second time with Palika. When Laszlo started to bring home larger quantities of milk than the neighbours thought was needed, the feeling that something was amiss permeated the neighbourhood. The Szagmeisters contemplated what could be said to the neighbours to appease their curiosity; to announce that Juliana had borne twins was belated and therefore farfetched. Still, in spite of everything, no one from the neighbourhood went to the police to report on the new tenant. Palika grew up beside his new mother. He became very close to Sandor, as if they were true twins.
Janos turned up in Subotica after it had been liberated in October 1944. There had been no news of him for quite some time. His joy at seeing how well his son was faring was mixed with sadness for not knowing what had become of his wife, Magda. As a jurist, he was recalled to Belgrade and given employment in the Court for War Crimes. He left Amir – Palika with his provisional parents.
When almost a year later Magda returned from Auschwitz, there was no end to their astonishment. Magda was worn out and the destructive effects of the mental and physical abuse and torture she had been exposed to during her internment in the camp could not disappear overnight. By that time, Laszlo and Juliana had assumed that the adoption of the child had become conclusive. Magda would not hear of it. In order to make them better understand her present situation, she made an effort to recount everything that she had gone through in camp. Finally, she only had strength enough to describe an incident when the capo, a woman from the camp supervising the inmates, had ordered Magda to feed her watchdog, an Alsatian. Magda had refused. “I don’t know whether my child is hungry, whether he is alive. You tell me to feed your dog? Feed it yourself.” From that moment on, she was exposed to immense torture; that she had managed to stay alive was in itself a wonder. However, she agreed that Amir should stay with the Szagmeisters a little longer until she regained her strength.
Amir had no knowledge of his mother Magda and likewise was unable to live without his mother Juliana. When the time came for Amir to go and live with his natural mother, Sandor became ill. The Szagmeisters consulted a physician who concluded that Sandor was ailing because he had been separated from his brother.
“You saved my child when he was in danger, now it is my turn to help Sandor regain his health,” Magda said and with a heavy heart, parted with Amir once again.
Magda and Amir resettled in Israel in 1949. Once the trials of war criminals were, for the greater part, over in 1951, Janos was given permission by Yugoslav authorities to join his family in Israel.