TWO WOMEN – BOTH MOTHERS TO ONE CHILD

Eva Komlós, married name Kohn, gave birth to a son, Petar, in Novi Sad on February 6th, 1944. The joy felt was dimmed by the absence of Petar’s father, Geza Kohn, who had been taken to Hungary to slave labour.
The Kohns had managed to escape the 1942 Novi Sad raid in which the majority of Jews living in Novi Sad and its neighbourhood had perished. They had hoped that the worst was over, but only a month after Petar’s birth the Nazis occupied Hungary and the extermination of Jews recommenced. Eva was an only child and she had no one to turn to for help in Novi Sad.
Petar’s paternal grandfather, Moses Kohn, and his wife, Roza, nee Wiener, had settled in Subotica at the beginning of the XX century. Roza had given birth to four sons and a daughter, Margita. Son Geza was born in Becsehely, Hungary, and educated in Subotica. On receiving his university diploma, he had moved to Novi Sad where he found employment. One of his brothers was also living in Novi Sad at the time. Soon after the Kingdom of Yugoslavia was invaded, the only one left in the Subotica family house was their sister, Margita. Their parents had died before the war and the two brothers who had remained in Subotica were driven off to slave labour. Alone in Novi Sad, Eva decided she would pack her things and move to Margita’s home in Subotica with her new-born baby. 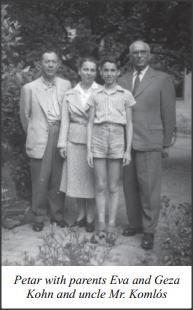 Although they were fully aware that the war was coming to its end, the Nazis nevertheless hastened to implement their monstrous plan to eradicate Jews. In May 1944 a ghetto was established in Subotica. Entire families moved to the fenced-in part of the city in Paralelna Street. It was only provisional accommodation; a number of families were put together inside one house. It was clear to all that the ghetto was just a transitory station to the Nazi camps. Eva, her son and Margita, to whose house in Subotica Eva had come hoping to find shelter, had to move to the ghetto with the others. The imprisoned Jews were told that they were being transported to labour camps. Eva was concerned how she would work with a baby to take care of. Who would care for Petar while she was away labouring? Petar was only four months old when Ana Matyasovics came to the ghetto to visit her friend Bozi Glueck. Ana and her husband, István, lived in Budapest. Their marriage was childless. Doctors had diagnosed that Ana could not bear a child. Bozi knew that her friend dearly wanted children and fully aware of the situation Eva was faced with, she suggested that Ana adopt Eva’s child and save Petar from camp. The two young women came to an agreement soon. Bribing the guards, who readily looked the other way in exchange for money, Ana managed to take Petar out of the ghetto. 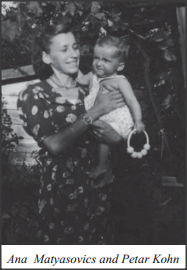 When Eva and Margita arrived in Auschwitz by way of Bácsalmás, they realized that Eva had done the right thing. Women with small children were immediately taken aside and killed in gas chambers. Owing to Ana Matyasovics, Eva had saved both her child and herself. Petar was now safe in Budapest in the home of Ana and István Matyasovics. Eva and Margita became inseparable inside the camp. They went to forced labour together, slept in the same barrack, shared the good, if there was anything good to share, and the bad which amassed by the day. One day Eva and Margita’s group was lined up and divided. One of the two women was placed to the left, and the other to the right. Margita was in the group led to the gas chamber.
Eva survived the tortures of the Nazi camp in Auschwitz and in 1945 she came to Ana Matyasovics’s home. Ana was glad that Eva had survived the war but also deeply troubled when she realized that Eva wanted to take her child back. Surviving the trials of being taken from one camp to another Geza, Petar’s father, returned home, too. Petar was lucky that both his parents had managed to survive horrendous death camps; mother – Auschwitz and father – Dachau, the last camp he found himself in before liberation. Petar’s mother and adoptive mother came to a strange agreement. Eva was fully aware that had it not been for Ana, her child would not be alive and decided that it would be in everyone’s best interest to let him live six months with one mother and the next six with the other. 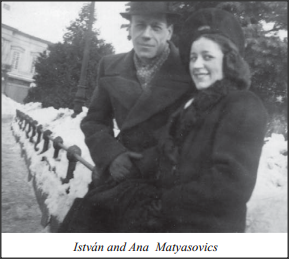 Who can tell what goes on inside the human soul and inside the body – the vessel of the soul. After some time Ana became pregnant and soon both mothers could each turn their attention to their own child. Once a grown up, Petar, nevertheless, still called Ana, Mother Ana. Out of respect for István and Ana, Petar kept the surname of his saviours, Matyasovics.